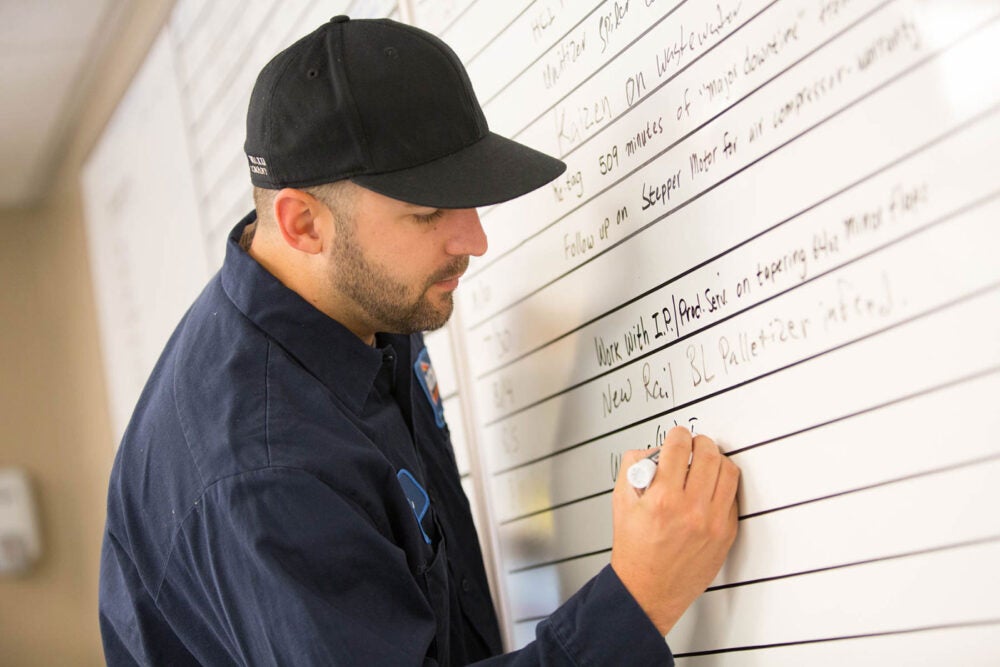 Sustainability in Our Facilities

As part of Clorox’s IGNITE strategy ESG goals, we have committed to science-based climate action across our value-chain, 100% renewable electricity in our US and Canada operations, and zero-waste-to-landfill in our global facilities. As we pursue these goals, we will continue to drive efficiency improvements that minimize our use of energy and water and generation of waste in our global operations. This builds on progress made during Clorox’s 2020 strategy period to drive more than 20% reductions in greenhouse gas (GHG) emissions, energy use, water use and solid waste-to-landfill in our offices, manufacturing and distribution operations.

All Clorox facilities follow a customized environmental management system (EMS) that tracks, reports and enables continuous improvement to help advance the company’s sustainability goals. The EMS also includes a task management system designed to identify and track compliance with applicable environmental regulations. Regulatory agencies —at both the federal and local level —conduct inspections regularly at all of our manufacturing facilities, focusing on the health, safety and environmental compliance of our product lines. Clorox also ensures an external or internal audit is conducted at all Clorox-owned manufacturing facilities at least once every two years, led by the company’s Global Safety and Environmental Team. And our Product Supply Organization provides employees with general environmental awareness and subject-specific training related to their roles, including annual regulatory training which is tracked in our EMS. 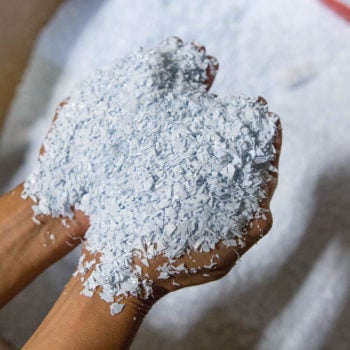 Although Clorox is a light manufacturer producing a modest amount of waste (the vast majority of which is non-hazardous in nature), we know minimizing waste is good for the planet and good for business. We have continued to invest in reducing our own environmental footprint, disclosing waste generation and recycling metrics, and setting targets to improve our waste reduction performance.

The majority of our waste is non-hazardous and over the years our efforts have focused on increasing our non-hazardous waste recycle rate, achieving zero-waste-to-landfill at a number of our manufacturing sites, and diversion of waste to landfill. We’ve installed robust recycling programs at all of our plants and offices, and we’ve also expanded our use of third-party recyclers to increase our diversion-from-landfill rates. We have reused, recycled or composted over 85% of nonsellable materials annually across our company operations since 2015, up from 65% in 2011.

We now have 16 sites globally that have achieved zero-waste-to-landfill status, 12 of which are plants. In 2020 we added 3 additional sites to the 13 we had achieved in our prior goal period. These include our Atlanta, Georgia Main (plant); Atlanta, Georgia West (plant); and Lima, Peru (plant). Our zero-waste-to-landfill sites currently represent 38% of our plants and 30% of our facilities globally where we control waste.

Since closing out our 2020 goal period in 2018, we will continue to report our annual landfill waste footprint, along with progress against our zero waste to landfill goal. Using 2018 as a baseline, in 2019 we achieved a 27% absolute and 25% intensity (per case of product sold) reduction in solid waste sent to landfill relative to 2018. This represents a year-over-year waste reduction of 2600 tons. 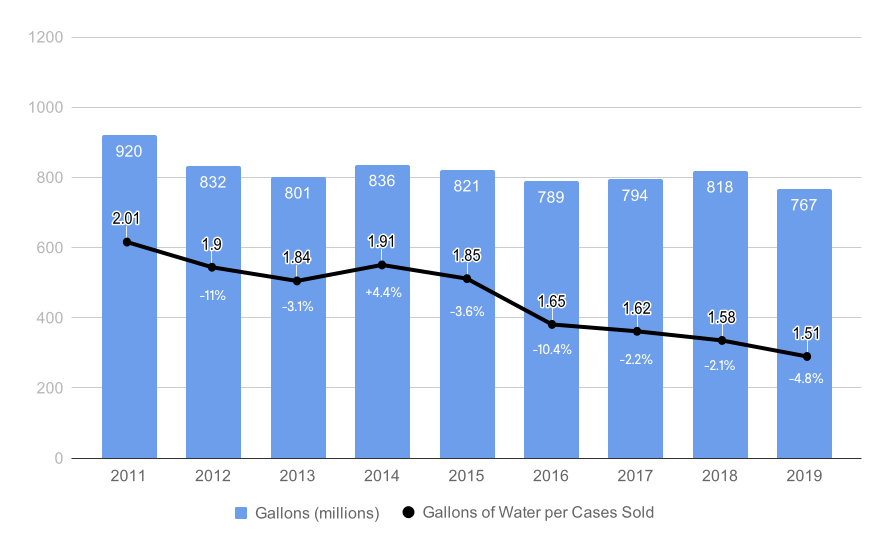 Clorox sold its Oakland, California, offices in 2013 and discontinued its Venezuela operations in 2014. Total solid waste to landfill for 2011 (the baseline year for our 2020 waste reduction goal) was recalculated to exclude solid waste sent to landfill at these facilities. Data for 2012 and 2013 were not recalculated.

Clorox acquired Renew Life in 2016. Total solid waste to landfill for 2011 (the baseline year for our 2020 waste reduction goal) was recalculated to include estimated solid waste sent to landfill from related facilities associated with this acquisition. Data for 2012-15 were not recalculated.

In 2017, calendar year 2011 baseline value for solid waste-to-landfill was restated to reflect: 1) the removal from the baseline of waste volumes attributed to the Aplicare business, divested by Clorox in calendar year 2017, and 2) the addition of the previously exclude waste stream, cafeteria waste sludge, to the landfill waste volume at our Lima, Peru, manufacturing facility. Data for 2012–2016 were not recalculated.

In 2018, Clorox acquired Nutranext and at the end of 2017 opened its new Atlanta West manufacturing. Solid waste-to-landfill for 2011 (the baseline year for our 2020 waste reduction goal) was recalculated to include estimated solid waste-to-landfill from related facilities associated with this acquisition and new manufacturing facility. Data for 2012–17 were not recalculated.

Zero-Waste-to-Landfill for Plants & Facilities (through FY 2020) 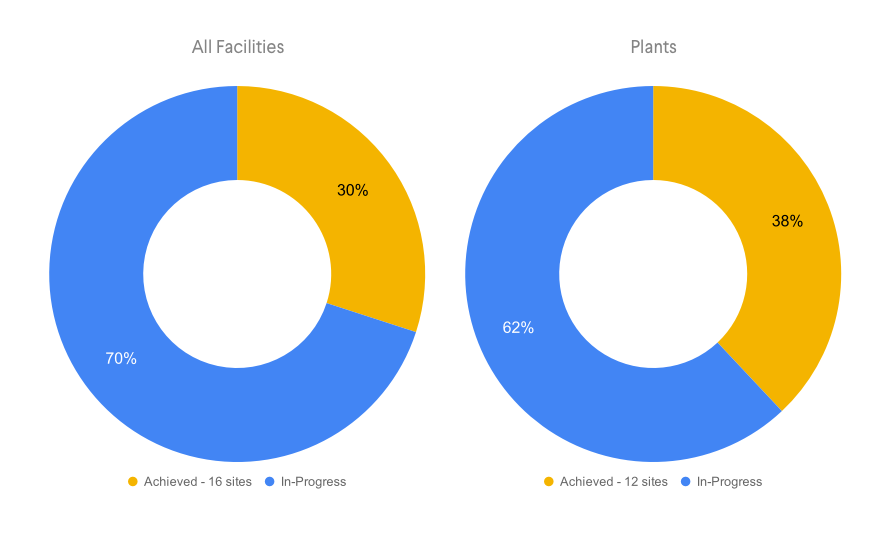 We began our zero-waste-to-landfill journey in our 2020 goal period, exceeding our goal of 10 sites with 13 sites achieved through 2019. Since then we’ve added 3 additional sites, for a total of 16 facilities as of CY 2020.

In order of achievement, these facilities are:

To be designated zero-waste-to-landfill, each facility had to:

Guidelines for our zero-waste-to-landfill program were developed to reflect UL Standard 2799, 3rd Edition (03/22/17).

The Orangeville plant achieved its zero-waste-to-landfill status in 2015 with recycling efforts that included a composting program as well as training for contractors and new employees. In 2014, the plant’s diversion rate was more than 97%, with less than 3% of waste going to landfill. In 2015, the plant began diverting its remaining nonrecyclable material to a regional waste-to-energy facility.

Our Fairfield plant partnered with a third-party vendor in 2011 to implement a recycling program that identified additional recyclable materials and placed recycling containers in easy access to employees. As of 2019, the plant recycled nearly 2,000 tons of materials and composts virtually all employee food waste, landfill waste has been reduced by more than 70%, and more than 98% of its the plants waste stream has been diverted from landfill.

Our Rogers plant identified new recycling streams, such as changing over to recyclable brown paper towels in the break rooms and restrooms and increasing recycling effectiveness through improved signage and minimizing the amount of recyclable material sent to a waste-to-energy facility. In addition to an existing program to regrind plastic scrap and reuse it on site, these reuse options helped the plant divert over 98% of the waste it generates, as of 2019.

Additionally, the plant’s leadership team spearheaded efforts to improve employee recycling rates through greater employee engagement. An Environmental Leadership Team was established. Standardized recycling containers that used space more efficiently were purchased, labeled and placed in locations where the waste was generated. Individual departments were held responsible for improving their own employees’ recycling habits. Recycling training was stepped up, as were efforts to make employees aware of the importance of being a zero-waste-to-landfill facility. Efforts to reduce the volume of scrap generated by the plant in the first place were increased as well.

Over the past several years, our employees have conducted numerous “dumpster dives” —digging and sorting through trash —and have reduced our solid waste by more than half at all of these facilities. We have found that this hands-on experience not only helps identify opportunities for improvement, but strengthens employee engagement and commitment to reducing waste.

Our cat litter plant in Spring Hill, Kansas, was one of our largest waste-to-landfill contributors back in 2010. The plant set a goal to reduce its landfill waste by tackling its biggest challenge: segregating and capturing reclaimable clay. This work, along with other measures, has lowered the plant’s landfill waste by about 70%, and the plant is focused on finding more waste-to-landfill reductions.

Drying ovens and combustion chambers used at our charcoal plants are lined with specialized brick that needs to be replaced every 15 to 20 years. So a team at our Kingsford Summer Shade, Kentucky, facility looked into the state’s Department of Environmental Protection beneficial reuse program to identify an alternative to landfill disposal for some of the plant’s brick debris.

First, employees identified a legitimate use for the brick —as a base for a gravel access road in the back of the property. The existing dirt road created dust during the dry summer, and storm runoff was muddy during wet winter months. A gravel road solved an environmental issue while reusing the old brick. Then the plant had to demonstrate that paving the road wouldn’t harm human health or the environment. Within two months, it had approval to proceed with the road. The project itself took just a few days to complete.

The Kingsford plant in Parsons, West Virginia, was looking for alternatives to landfill disposal for concrete debris that was generated after sections of its roads had to be replaced as a result of rough winters and heavy plant traffic.

In 2017, a local official asked the plant if it had any debris for use on a state highway transportation project called Corridor H. As it happened, the Parsons plant had several loads of concrete stored on site, ready for just this type of project.

While West Virginia doesn’t have a formal beneficial reuse program, it does allow reuse of clean, inert concrete and brick for fill or road base. After this first successful reuse of plant debris, we’re looking to identify other, similar kinds of debris that could be used for the Corridor H project or others like it. 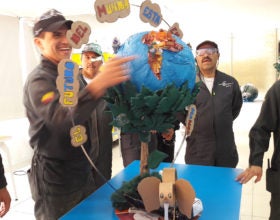 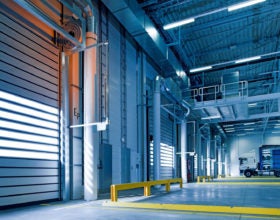 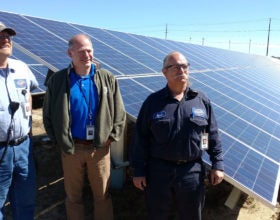 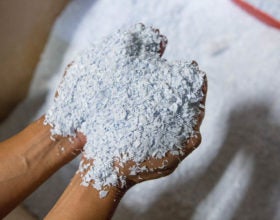 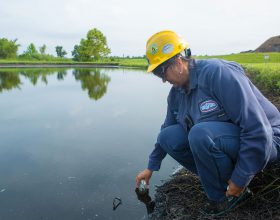