The Burt’s Bees brand has partnered with the E.O. Wilson Biodiversity Foundation to map 6,000 bee species worldwide, supporting one of the grandest conservation efforts of our time. The partnership was announced during the second annual Half-Earth Day celebration, this year held at the American Museum of Natural History in New York City.

With species extinction rates currently 1,000 times higher than any prior time in human history, Burt’s Bees’ move to support pollinators through the lens of biodiversity comes at a critical juncture — particularly as bee populations, recognized as so-called “keystone species” which are central to many ecosystems worldwide, continue to decline.

“We should forever bear in mind that the beautiful world our species inherited took 3.8 billion years to build,” explains E.O. Wilson in his book, Half-Earth. “The intricacy of the planet’s species we know only in part, and the way they work together to create a sustainable balance, we have only recently begun to grasp.” 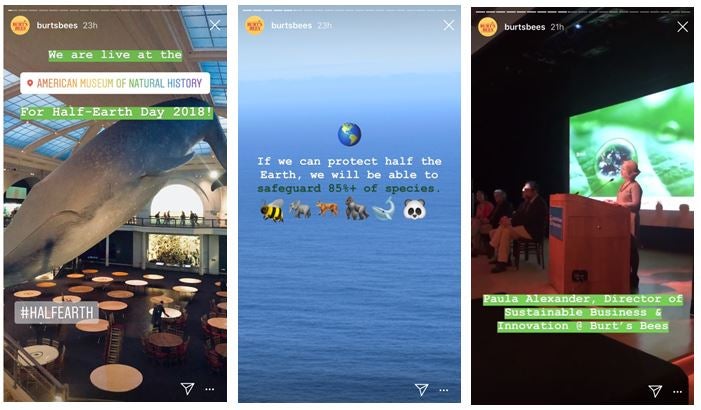 Burt’s Bees educated its fans about the Half-Earth Project and biodiversity via Instagram stories.

Why map the bees?

“Mapping the known species of bees is the first step in their conservation – and ultimately the conservation of much of the flowering plant life and plant-dependent species worldwide,” said E.O. Wilson Biodiversity Foundation President and CEO, Paula Ehrlich. “Burt’s Bees’ commitment to mapping the bees is a critical step toward our goal of conserving the most vital half of the Earth’s natural resources for the sake of the planet as a whole.”

With Burt’s Bees support, the Half-Earth Project will map approximately 6,000 species of small but vital bee populations. By understanding the abundance, occurrence and diversity of bee populations, we can prioritize where and how we manage the land that they call home.

While bees remain vastly under-researched, their continued declines impact the reproduction of the majority of plants and the many species, including us, that rely on those plants for food and survival. 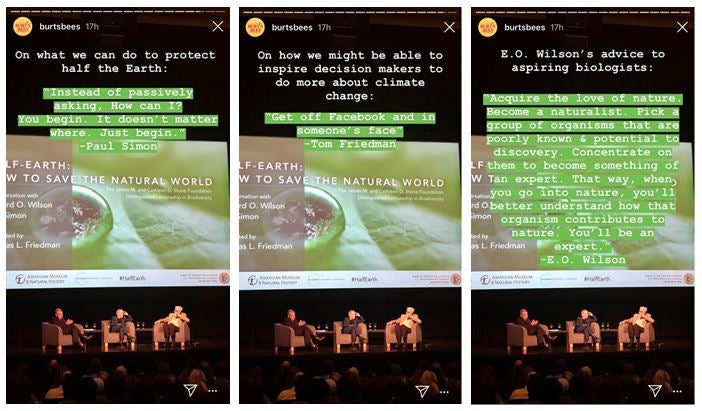 Paul Simon, Thomas Friedman and E.O. Wilson closed out Half-Earth Day with a panel discussion, highlights of which Burt’s Bees shared on Instagram.

The Half-Earth Project support comes as part of a broader philanthropic shift, wherein the Burt’s Bees Foundation will support the beauty and diversity of nature, or biodiversity, moving forward.

The change has roots dating to the brand’s founding values over 30 years ago: Burt Shavitz, a beekeeper with a deep appreciation for wilderness, and Roxanne Quimby, a lifetime conservationist.

As a proponent of honeybee health for over a decade since the onset of Colony Collapse Disorder, Burt’s Bees initiatives have spanned research, education, and conservation, ultimately impacting over 145,000 acres of healthy pollinator forage on farms. Our brand’s commitment to nature extends into our ongoing business practices through carbon neutral certification since 2016, land-fill-free operations since 2010, and responsible sourcing programs focused on key ingredients and communities. In 2018, Burt’s Bees was recognized as the No. 1 brand in the U.S. considered to take the most concrete action to respect people and biodiversity by the Union for Ethical Biotrade Biodiversity Barometer.

“Our passion and support for the Half-Earth Project stems from an undeniable fact: human and honeybee health are intrinsically linked to the health of the natural world as a whole,” says Paula Alexander, Director of Sustainable Business at Burt’s Bees. “Healthy ecosystems have been central to our journey as a company, right down to our co-founder Roxanne’s belief that, because we take from nature, we must protect and provide for it.”

To learn more about the Half-Earth Project and biodiversity, visit www.half-earthproject.org, where you can  take the Half-Earth pledge to protect half the Earth for the long-term health of the planet and all who call it home.

In celebration of the partnership, you can also purchase a Limited Edition “Earth’s Bees” Lip Balm ($3.30) on www.burtsbees.com while supplies last. 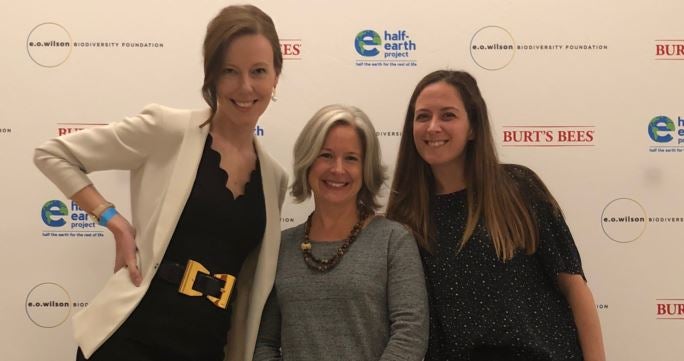