In the past year, we have talked a lot — and many of us have learned a great deal — about issues of systemic racism and inequality in the U.S., particularly against the Black community. At Clorox, we came together in solidarity, with resolve to make a positive difference through both words and action.

Since the start of the pandemic, a sharp rise in instances of racism against Asian Americans has also come to light. Between March and December of last year, Stop AAPI Hate, a coalition that tracks and responds to violence and discrimination against Asian Americans and Pacific Islanders, received nearly 3,000 reports of racism and discrimination targeting this community. And, according to Pew Research, four in 10 U.S. adults now believe it has become more common for people to express racist views toward Asians.

Many of us at Clorox, myself included, have been disturbed to see them hit close to home, with a number of violent assaults against elderly residents happening right here in the San Francisco Bay Area. Some of our own people have been targets of physical and verbal attacks as well.

Our view is clear: We have no tolerance for discrimination of any kind. We stand with the Asian community and are committed to #StopAsianHate.

We’re proud to be a company that cares deeply about its people. As allies and advocates, we’re supporting our co-workers who are people of color as well as our LGBTQ+ teammates. And we’re encouraging everyone to take steps that will help advance systemic change in support of social justice. Here are some things we’re facilitating at Clorox — and that we think others may want to consider, too: 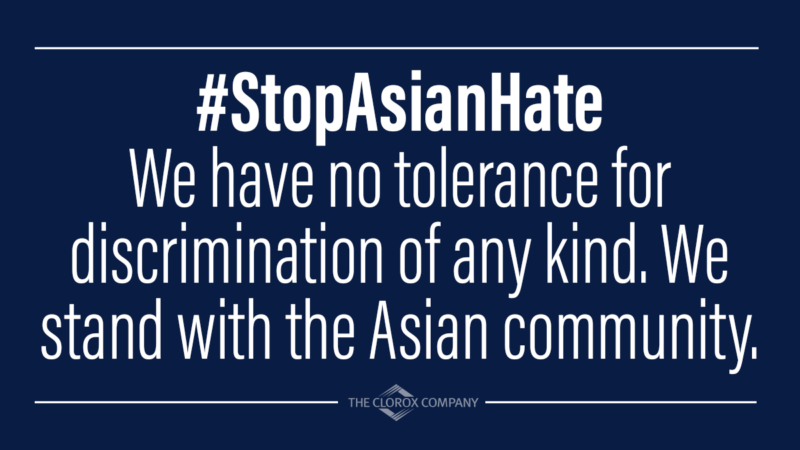 Keep learning about perspectives different than your own. When we do more listening than talking, we can build empathy with others as our perspectives are expanded – whether through formal training at our own company or by engaging with those in our community. We can also learn from the many free resources available, such as The Culture Map by Eric Meyer, which highlights how different cultures look at topics such as time, relationships and hierarchy, and Anti-Racism Daily, which offers content about hate crimes against Asian Americans.

Report instances of injustice or discrimination you experience or witness. We encourage you to speak out or take action against racism — whether you see it in the workplace or in your community. At Clorox, we’re asking people to raise issues immediately so we can turn them into teaching moments. Hate crimes against Asian Americans also can be reported to Stop APPI Hate.

Engage. Though uncomfortable at times, difficult, respectful conversations with others can help us move past barriers. At Clorox, our “Cup of Understanding” sessions enable us to learn how to have those candid discussions that can help everyone better understand and appreciate each other.

Donate or volunteer. Consider giving your time or donating to organizations that fight racism and inequality where you live.

Supporting each other and those in our communities through challenging times is a social imperative. We can and must do better — and we can all play a role.