This Women’s History Month, join us on a tour of our the Clorox Archive as we look at how we’ve advertised our products over the decades.

As traditional women’s roles have evolved to include work outside the home, Clorox advertising has kept pace by reflecting these cultural shifts.

Early on, our ads spoke solely to women, offering housewifely advice (and sometimes comiseration). Implicit in them was an understanding that a woman was measured by how well she kept house — and that tat a tidy home and well-fed family deserved most of her time.

How times have changed!

Today, our ads speak to women as well as men. And the underlying message in all our ads is that while a well-run, clean home remains important, keeping it that way is not our primary business. Life is.

Men and women alike live busy, important, rich lives — both in and out of the home. Clorox products exist to help everyone thrive. 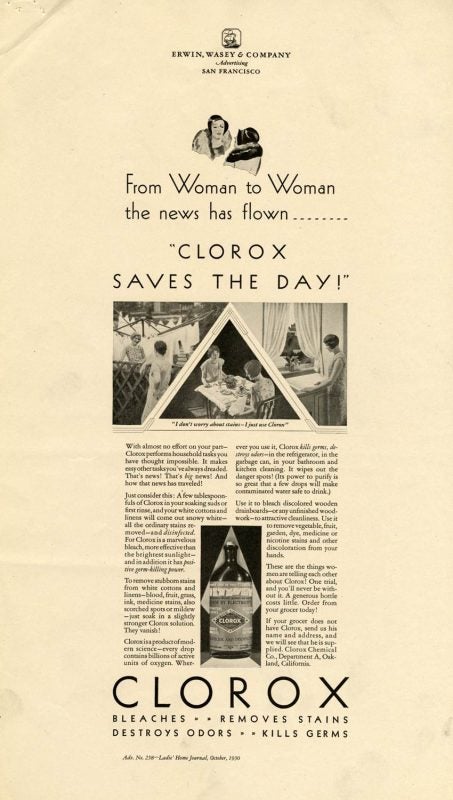 A 1930 advertisement for Clorox® bleach.

In 1930, Clorox ran this “Woman to Woman” advertisement in the Ladies Home Journal.

“With almost no effort on your part, Clorox performs household tasks you would have thought impossible!” the ad reads, “That’s big news!”

“Woman, can’t you cook without scorching?” 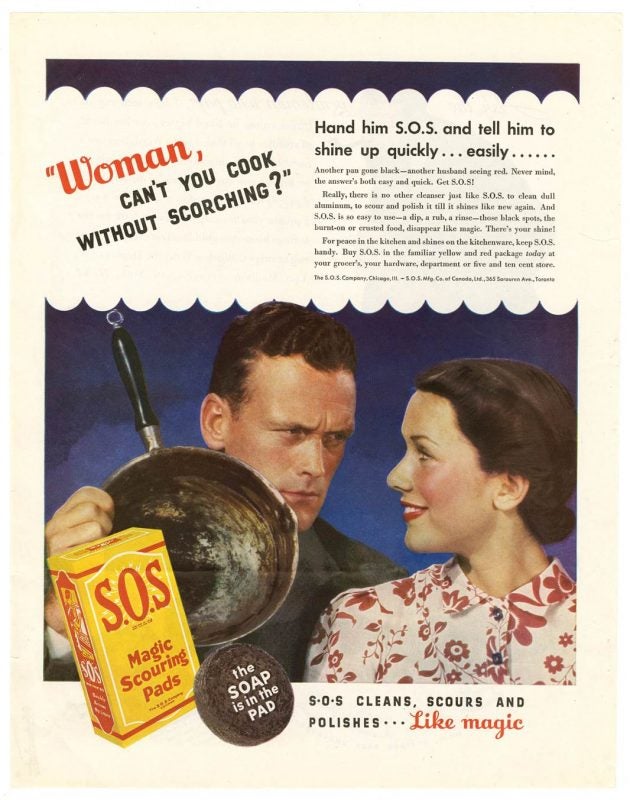 This 1937 ad reads, “Another pan gone black — another husband seeing red.” The woman in question doesn’t look worried because S.O.S® scouring pads will restore the dirty pot. What worked in 1937 would probably lose us consumers today.

The Clorox Company acquired the S.O.S® brand in 1994. “S.O.S” stands for “Save Our Saucepans,” and the brand spoke to women in a way that conteporary audiences consider sexist. While incredibly dated, these ads tell a story about traditional gender roles in the pre- and post-World War II years. 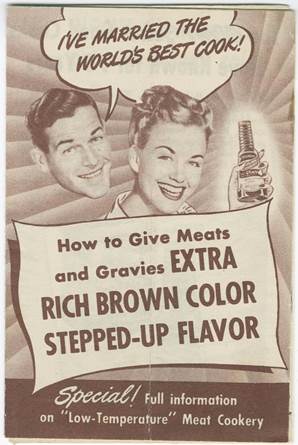 This 1948 advertisement for Kitchen Bouquet® browning sauce (acquired by Clorox in 1971) shows a husband praising his wife as “the world’s best cook.”

But a subtle, cultural narrative underlies this advertisement.  In 1948, the United States was slipping into a postwar economic depression and “low-temperature meat cookery” (as it’s referred to here — akin to today’s slow cooking) was a way to prepare tough, inexpensive cuts of meat. The wife in this advertisement is thrifty, industrious and — in hard times — able to use Kitchen Bouquet sauce to transform a less-desirable piece of meat into a fine-looking, appealingly browned meal.

“Clorox gets out dirt other detergents leave in” 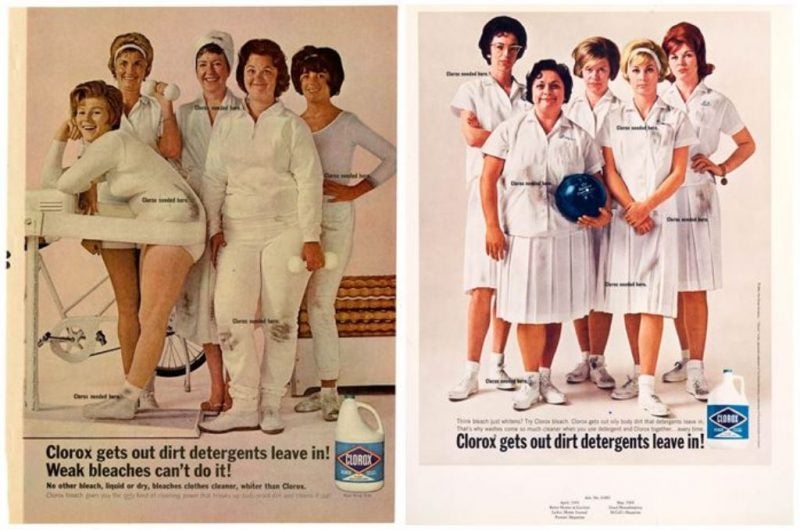 By the 1960s, Clorox® bleach had started talking to women in a more modern way.

By the middle of the 1960s, as the women’s liberation movement gained steam, Clorox® liquid bleach started running a new kind of ad. These show women unapologetically pursuing their own interests, with help from Clorox bleach. These are some of our first ads showing women as people rather than holding them up as perfect wives and homemakers. And the messaging doesn’t sound nearly so dated. 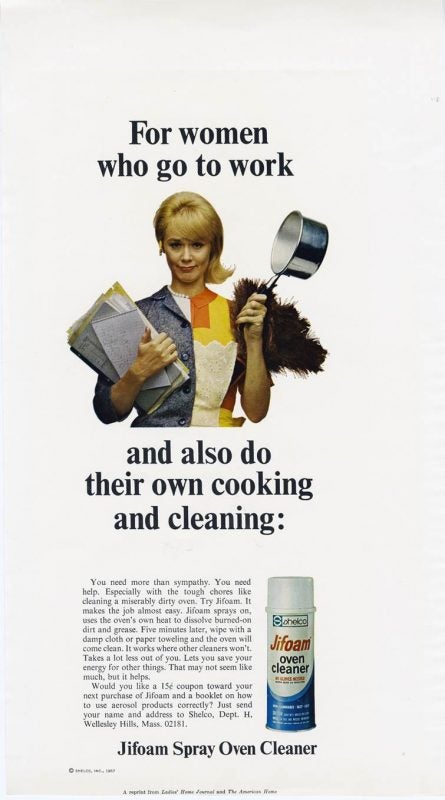 A 1967 advertisement for Jifoam oven cleaner features a working woman.

In 1967, this advertisement for Jifoam Spray Oven Cleaner (acquired in 1969, dissolved in 1981) reads: “You need more than sympathy. You need help.” It promises to make oven cleaning easier, so women have “energy for other things.”

While this may not sound groundbreaking, it’s the first ad we see in our Archive that shows women in the workforce. Turns out, 1967 was a critical year in the women’s liberation movement: The National Organization for Women announced its Bill of Rights for women, President Johnson issued an executive order extending affirmative action policies to women, and women started pushing into traditionally male sporting events, like marathons.

From housewife to “Boss Mom” 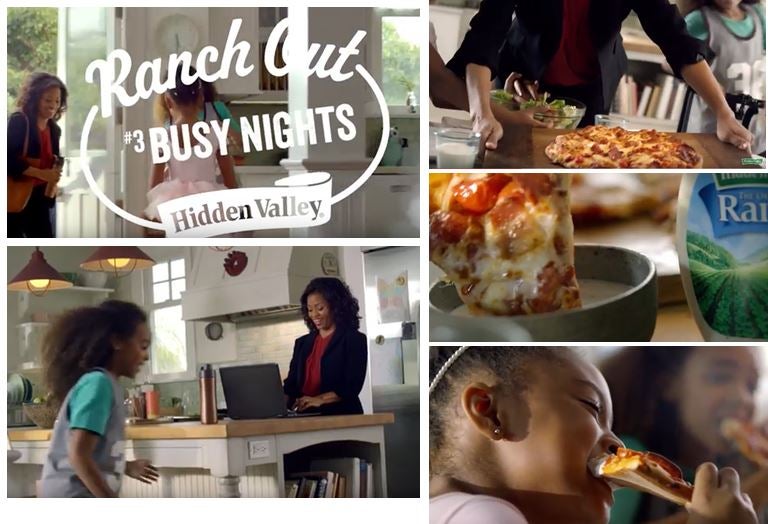 This new ad shows how a busy “boss mom” does it all, with a little help from Hidden Valley® ranch

Fast forward to today, and you’ll see a very different kind of woman in our ads. After all, women make up 47 percent of the total U.S. labor force, according to the Department of Labor. Our ads reflect that, which is why you’ll also see men doing laundry, cleaning, dinner and dishes.

Check out this new ad for Hidden Valley® ranch. Ranch proves a key ingredient to the dinner this busy mom puts on the table.

Because our products are made for real life, our ads need to show life the way it is.